The lack of efficient tools to manage IoT device deployments has become a liability for modern organizations. This shortcoming is particularly evident in the area of firmware updates for IoT devices. In this article by Securithings, we raise the main issues and analyse a possible solution.

To better understand organizations’ IoT-related challenges, we surveyed customers managing large fleets of devices across various industries. When asked to rank their main operational challenges, the majority named ongoing maintenance of IoT firmware updates as their most critical challenge.

In the absence of automated tools, most firmware updates are performed manually (if at all). The drawbacks of manual updates include that they are:

The result is that organizations rarely upgrade firmware versions – even those with known vulnerabilities . This means that their devices are regularly exposed to potential cyber attacks or operational failures. The Power of Automation

Manual firmware updates are a non-starter for maintaining IoT deployments – often spanning several geographically distributed sites. Moreover, unlike other types of maintenance activities, firmware upgrades require physical access to the device itself. When maintaining large-scale IoT deployments (thousands of devices and more), the need for automation becomes even more critical.

From a security standpoint, using an old firmware version with published vulnerabilities is an open door for cyber attackers. After exploiting the vulnerability to gain a foothold in the IoT network, attackers can potentially move laterally within the network, jeopardizing the organization’s most valuable assets and data.

Not performing timely firmware upgrades can also exact a heavy operational price. For example, let’s say your Physical Security manager notices that CPU utilization has reached 100% on dozens of devices. If the root cause isn’t detected and corrected quickly, it’s only a matter of time before those devices crash. And even before they crash, they may not be operating properly.

But where the only option is time-consuming manual firmware management, we can’t expect to win against the clock.

Apply the above example of devices running at 100% CPU to an airport setting. IoT devices are massively deployed in airport security systems, so if an issue like this cannot be corrected in time you have the opportunity for security breaches of epic proportions!

Additionally, airports are now using smart technologies to ease passenger flow, with systems such as automated baggage handling, smart elevators etc. In a case where device malfunction can’t be prevented or fixed quick enough, as described above, the resulting turmoil in an airport would indicate that an alternative to time consuming manual firmware updates is becoming essential.

Airports are just one example of an environment where automating firmware updates of IoT devices is becoming a liability. Seaports, financial institutions, casinos, and corporate campuses face the same challenges from a security and operational standpoint. 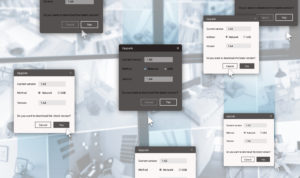 How You Benefit from Automated IoT Device Firmware Updates By automating firmware upgrades across all devices, organizations can streamline operational efficiency and extend device lifecycle, while ensuring the security and availability of their business-critical IoT devices. Equally important, automation enables significant cost and time savings by eliminating manual updates.

SecuriThings Horizon brings IT management standards and capabilities, such as automated firmware upgrade and password rotation, to the world of IoT. Horizon is a dedicated IoTOps solution that helps organizations manage device operations at scale using data, analytics and automation.

For more information about how your organization can benefit from automated operations for IoT devices, click here.